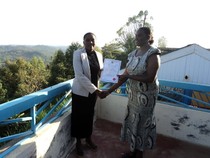 During August 2010, our two co-founders (Martha and Genevieve) discussed some of the challenges facing people in Kangema and the surrounding area of the Central Highlands of Kenya. Martha and a couple of other ladies were already trying to help a few orphaned children with school fees, foods and clothing and an agreement was made to build on this and turn it into something bigger and more sustainable in the long-term.

In October 2010, Wamumbi Orphan Care was registered as a local community based organisation and, in January 2012, Wamumbi Orphan Care Foundation became a recognised small charity in the UK and registered with The Charity Commission in July 2014. Our vision is to provide support to orphaned and vulnerable children in the area of Kangema township. We have built support within the community and volunteer helpers contribute greatly to making our meetings and workshops with the children and guardians a success.

Previously we were kindly provided with a meeting place for free by a local pastor at the Deliverance Church in Kangema. This was used for our meetings up until January 2013 when we secured our own office that doubles up as a library and study area for our children. This will be used until we secure our own land and build a drop-in centre for the organisation.

Contact us to discuss ideas and get involved in our work

This month we received a wonderful donation of solar lights from Jaguar Land Rover, enough for all our children and guardians. This will make a huge difference - it means the children can study in the evenings and other chores can be done much more easily after it gets dark.